So this is old news.

But I still am going to give my two cents. A couple weeks ago now, “The Dress” swept across the internet; you couldn’t enter a social media site without encountering statuses and polls and explanations (both plausible and ludicrous) and comics and comments of those who were just too cool for the whole phenomenon (“Guys… it’s just a dress. Who cares?”). Celebrities tweeted, online journals wrote about it, and the internet lost its collective mind. Ironically, I happen to be taking cognitive psychology this semester and at the time of the Dress’ takeover, we had just finished a lengthy discussion on perception– including optical illusions. For any who might not have seen the dress, the central controversy arises over the colour people experience when they look at this particular image. The most common colours seen are blue/black and white/gold, although there are several other mixtures I have heard.This is the dress: 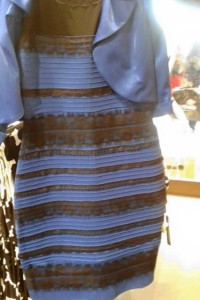 After the dress exploded on social media, some people (rightly so) asked why everyone cared so much. Seriously, what’s the big deal? It’s just a dress. While these people are right in a sense, they are also amazingly incorrect and have failed to grasp why this particular dress speaks so centrally to the human experience.

This phenomenon is not new. Optical illusions have existed for a long time and I would be surprised if anyone over the age of 10 had never encountered one before. This particular case has to do with top-down mental processing (as many optical illusions do). Simply put, the image that is projected onto the retina of your eye is ambiguous, and the brain does a lot of work before you come into conscious awareness of an image regarding what is the most likely explanation for the ambiguous image it received. These processes are called top-down processing because if you visualize the neurological systems responsible for perception as a hierarchy, the effector decisions are occurring higher up the hierarchy and travelling downward. This is contrasted with bottom-up processing, which relies more strongly (components of both are obviously integral to every perceptual experience) on the lower levels of the hierarchy– that is, the actual stimuli that initiates the pathway (light stimulating the retina, sound waves stimulating the inner ear, etc.) that then works its way up the hierarchy. Part of top-down processing involves cognitive heuristics or “rules of thumb”, subconscious assumptions that guide us through day-to-day life. These assumptions include both learned and evolutionarily encoded rules that assume things like light coming from above. Because natural and artificial light almost exclusively indeed come from above, this heuristic is useful the vast majority of the time, but it can cause a faulty perception if the assumption is incorrect. I would theorize that what makes this particular optical illusion so potent for those who experience it is that unlike the majority of optical illusions you see in textbooks and whatnot, the dress is something we encountered in the natural environment– the “real world” so to speak– and thus takes on a new level of meaning for us.

Simply put, the dress is a classic example of the assumptions that are made in mental processes without a person’s awareness. The light in the picture of the dress creates an ambiguous image, and it’s the assumptions that a person’s mind makes about the nature of light that results in differing perceptions of colour. (I don’t know the specific assumptions made in this case, but google awaits for those interested!) It is not, as some people had said, a function of how many rods vs. cones you have and night vision acuity (those who told me the cause of the perceptual discrepancies was due to person X having more rods than person Y and therefore better colour vision at night made me laugh, since this is simply not how rods and cones work.) One basic piece of evidence that shows this case cannot be accurately explained by such bottom-up processing (where the perceptual stimuli is encoded differently) is the ability of some individuals, such as myself, who can “force” the image one way or another– who can see either black and blue or gold and white depending on what they focus on and bringing that perception to mind.

So, I still haven’t answered the original question. Why does this matter? Who cares? The answer is simply that if we can have widely differing perceptions of a common stimulus, it calls into question all our perceptions and ergo the truthfulness of our realities. Simply put, as humans, we never actually experience a stimulus itself. What we experience is a representation of that stimulus, a representation that has been thoroughly edited by our brains before we’re even aware of it. By extension of these processes that go on beneath the level of awareness, we can never be sure how accurate our perceptions are. As part of the system, and the end of the system moreover, we cannot extricate ourselves from the process and observe with an objective eye how much our perceptions actually embody reality. All we have is what we’ve been given. Thus, a large part of how we comfort ourselves that what we see is accurate comes from comparisons with the reported perceptions of others– consensus=security. This means that when we have an experience where our friends and family and many other people have wildly different perceptions of the same object, it calls into question how realistic our reality is. Which really, is quite terrifying. This is why the human mind is terribly frightening to me, because we are prisoners and subjects of our minds. A similar phenomenon is apparent with memory, where confidence in the accuracy of a memory has absolutely no relation to the accuracy of the memory itself. Working at a Long Term Care facility has also made me particularly aware of this fact. So much of mental processing goes on without our control, without our say-so, without even our awareness. Simultaneously the human mind is absolutely amazing in all the things it does, and by no means do I mitigate that fact. But it also is incredibly scary, and thus must be treated with great respect and caution of awareness.